There are two ways to get to Corsica, either by air from mainland France or certain European capitol cities or overland by car or train, and then by sea. Public transport on the island is limited so your entry point to the island should be chosen with care for the start of your walk. 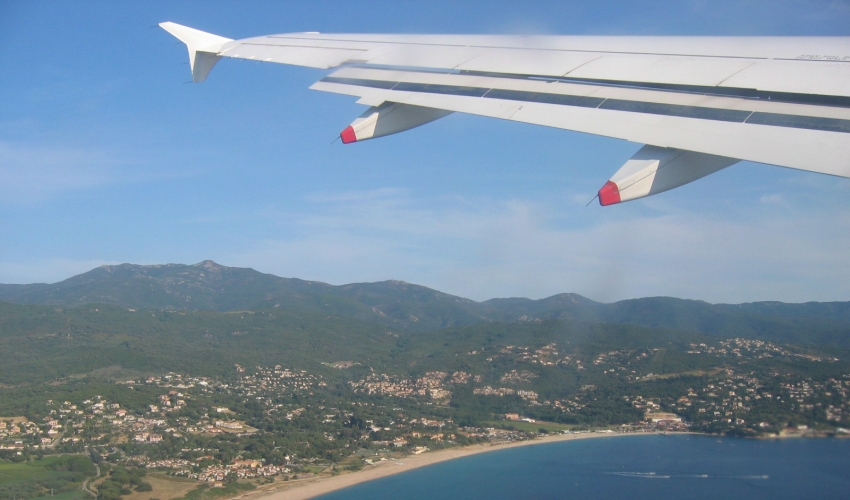 Corsica is a French island located in the heart of the Mediterranean, just 80km from the coast of Italy and 170km from mainland France. Accessible from many European countries during the summer months, the island has 4 international airports, Calvi & Bastia in North Corsica, and Figari and Ajaccio in South Corsica. Direct flights are from France and major European cities, with many other connecting flights for those from further afield. Please call us for further information.

Ajaccio (AJA) is the largest international airport on the island, just 6km from Ajaccio. It is the main hub in the South for Air Corsica with daily flights to Paris, Marseille and Nice. Low cost carriers now also use the airport, including Easyjet, Volotea, Tui.

The main airport in the North is Bastia (BIA) 25km south of the town. Low cost flights are possible from mainland France, and the UK with Easyjet. Other operators include Volotea, Vueling, Norwegian.

Direct Flights from the UK

Corsica is a hop over the Med from both mainland France and the coastal towns of northern Italy. Car ferries run from Marseille, Toulon, and Nice to Ajaccio, L'Ile Rousse, Propriano, Porto Vecchio and Bastia. These crossings are long, taking anything from 6 to 12 hours, private cabins or seats are available. Crossings are with Corsica Linea, La Meridionale, and Corsica Ferries. Sardinia can be reached by ferry from Bonifacio.

The port towns of Marseille, Toulon and Nice are easily accessible on the French TGV network SNCF. There is also a direct Eurostar service from London to Marseille.

For a quotation or to book a ferry, contact us.