/ About Corsica A short history of Corsica

History of Corsica - An Introduction

For those who look for culture on an active holiday, Corsica’s heritage remains intact, the Greeks, Romans, Pisans, Genoese and French have ruled the island over history and have left their mark in the landscapes of Corsica. From the many prehistoric sites including Filitosa, to the Genoese watchtowers that top most of the headlands, Corsica is a dream for all history enthusiasts and adventurers alike. Corsican’s themselves are a people rich in traditions – proud of their heritage, extremely friendly and generous, and with their own language, music and beliefs. The emblem of Corsica is the Moor’s Head or “Tête de Maur” a symbol dating back to medieval times and it can be seen throughout the island on everything from locally produced goods to official buildings and property.

The earliest evidence of Neolithic human inhabitation of the island comes in the form of Dame de Bonifacio human remains dating back to 6570 BC. Corsica is also home to many standing stones and dolmens, traces of the Torreens a Bronze age warrior people who lived here around 2000 BC. Sites you can visit include Cauria near Sartene and Filitosa in the Valinco.

Corsica has also preserved the memories of the many nations who conquered the island - a saga that includes the Greeks, Romans, Vandals, Goths, Moors and Genoese & Papal armies. According to the Greek author Herodotus, the Phoeniciens were the first to colonize Corsica, and the Greeks established Alalia Aleria in 566 BC.  Then came the Etruscans and Carthaginians who influenced the island until the Roman occupations. Aleria was a military centre for the Roman Empire and part of a larger region including Sardinia. The Romans planted vines, exported olive oil, honey and cork.

During the early Middle Ages, Corsica was the prize in rivalries between the Papacy, Pisa and Genoa. When the Genoese finally took over Corsica in 1284, five centuries of occupation followed. The first of the Corsican patriots came in 1553, in the shape of Sampiero Corsu, a Corsican Mercenary Colonel who led a French and Ottoman military expedition to take control of the island. Corsica was strategic in the Mediterranean and the Genoese were firm allies of France's enemy Spain. Sampieru managed to summon a local revolt and took the towns of Ajaccio, Calvi, Bastia and Corte but he was stopped in his tracks when through the peace Treaty of Cateau Cambresis, Corsica was simply handed back to the Genoese in 1559.

It was following his invasion that the Genoese fortified Corsica with many towers to defend from marauding invaders.

In 1755, Pasquale Paoli, another Corsican patriot, proclaimed independence from the Genoese.  Paoli gave Corsica a democratic constitution, which later went on as a blueprint for the American Constitution. He also founded the island’s University. The Corsican’s refer to him U BABBU DI A PATRIA – the Father of the people.

Despite the independence, the exhausted, and by then ruined Genoese who were still present in pockets on the island, handed Corsica to France in 1768 with the Treaty of Versailles. After the French army arrived, Paoli wanted to protect Corsica’s independence and his army fought the French in 1769, at the Battle of Ponte Nuevo, the battle was won by the French army, Independence was over and Paoli fled to London. The French Revolution further aggravated the opposition between clans and in this turmoil, Paoli returned to Corsica. Paoli appealed to the English for help in his struggle, and the English occupied the island from 1794 until 1796 under the crown of George III, the English left and again France yet again took control of Corsica.

Napoleon Bonaparte, is perhaps the most famous Corsican worldwide. Born in Ajaccio on August 15th 1769, Napoleon became First Consul of the French Republic in 1797, and his name and statues are common place in his home town of Ajaccio to this day. Napoleon doesn't seem to have much nostalgia or love for the island of his birth, however, and during his reign Corsica is largely neglected by the French state.

In 1814, at the end of the Napoleonic wars, Corsica is occupied by British troops but the island is promptly handed back to France once the monarchy had been reestablished. When Napoleon was exiled to the neighbouring island of Elba, Ajaccio is said to have “rejoiced”!

Corsicans fought and died in large numbers in the Frist World War, there was a fall in agriculture and a mass exodus of the population, resulting in recession in Corsica’s economy.

In the Second World War, following the allied defeat of 1940, Corsica was under control of Vichy as part of the French Zone Libre.

Corsica was massively occupied from November 1942 following the North African offensive by the allied forces, initially by 85000 Italian and then 12000 German troops during their retreat. There was strong resistance fighting of the local Maquis forces, and in October 1943, following the destitution of Mussolini and the armistice of Italy, the island was liberated following fierce fighting, becoming a military hub for Southern France and home to a number of US Air Bases, becoming known as USS CORSICA.

Post-war tensions have seen the continued and growing struggle for autonomy. At Aleria, in August 1975, a group of armed Corsicans, occupied a vineyard, the French authorities sent in a heavy handed response and the events that followed lead to the creation of the Nationalist movement and the FLNC was born. Today Corsica votes considerably for autonomous and independent politicians at most elections.

Corsican patriotism is set in a deep passion for the island, attempts by outsiders to make a “fast buck” are resented and have seen incidents in the past including destruction of property.  When you arrive you will be instantly aware of the differences between the island and mainland France. Corsicans are a people rich in traditions, proud, hospitable and generous and away from the coast you will find a way of life authentically Corsican.

You will notice this symbol across the island - even on our logo. The Moor's Head symbol dates to the 13th century, when the Aragonese were given rights over Corsica by the Pope after their victory over the Saracens. They portrayed their acquisition by the Moor's Head. It was, however, forgotten in Corsica during the subsequent Genoese occupation when the Virgin Mary (the patron Saint of Corsica) was used to symbolise Corsica.  In the 18th century the German adventurer, Theodore von Neuhoff (who became king of Corsica for 6 months in 1736) chose the forgotten Moor's Head as the National flag. Twenty years later it was re-established as the official Corsican flag by the great Corsican patriot: Pasquale Paoli. He insisted that the bandana was moved from its original position covering the eyes (to the forehead) in order to symbolize the liberation of Corsica.

It has since become the Corsican emblem and can be seen on flags throughout the island. Any locally produced goods; official buildings; Corsican owned boats; properties and aircraft carry this symbol. All Corsican political parties (whatever the strength of their Nationalist tendencies) also use this emblem, but it is generally a simple statement of pride in their country. 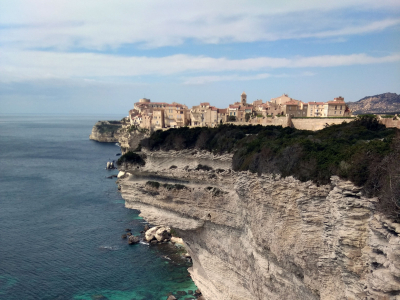 Corsica offers a unique active holiday destination, find out a little bit more about our mountain in the Mediterranean sea...